Francesco Demuro was born in Sardinia and studied at the Conservatories of Sassari and Cagliari where he was taught by Elisabetta Scanu. His debut in Parma in Luisa Miller in 2007 earned him numerous engagements in some of the most renowned theatres in Italy and abroad. In 2009, he made his American debut in Seattle in La Traviata and then sang the role of Ferrando in Così fan tutte at Tokyo’s Suntory Hall. He also appeared with Lorin Maazel in La Traviata in Valencia (Spain) and then went on to perform in Lucia di Lammermoor (Edgardo) in Hamburg and Warsaw, La Traviata and Der Rosenkavalier (the Italian Singer) in Dresden, L’Elisir d’amore (Nemorino) for his debut at Milan’s La Scala, La Bohème in Detroit, Maria Stuarda in Athens, L’Elisir d’amore and La Bohème at the Staatsoper in Vienna, and a new production of Rigoletto at the Wiener Festwochen (directed by Luc Bondy). In the summer of 2011, he performed at the Verona Arenas in La Traviata, and then made his London debut at the Royal Opera House Covent Garden in Gianni Schicchi (Rinuccio) under the baton of Antonio Pappano.
He has appeared in La Traviata at the Berlin Staatsoper, in Limoges, at the Vienna Staatsoper, the Frankfurt Opera, in Las Palmas and Bari, at London’s Covent Garden, the Paris Opera, New York’s Metropolitan Opera, Venice’s La Fenice, Madrid’s Teatro Real, and Barcelona’s Liceu.
He also sang Rigoletto in Hamburg, at the Torre del Lago Festival, in Tokyo on tour with Milan’s La Scala under the musical direction of Gustavo Dudamel, at the Paris Opera, and the Verona Arenas. His other productions include Don Pasquale and Maria Stuarda at the Théâtre des Champs-Élysées, Macbeth in Munich, Rigoletto, Così fan tutte and Falstaff in San Francisco, Maria Stuarda in Bilbao, Falstaff at Milan’s La Scala, La Bohème and Rigoletto in Seattle, Falstaff, Romeo and Juliet and Don Pasquale at the Verona Arenas, L’Elisir d’amore at Berlin’s Deutsche Oper, Maria Stuarda at the Monte-Carlo Opera, I Puritani (Arturo) at Budapest’s Mupa and the Savonlinna Festival, and Les Pêcheurs de perles at the Berlin Staatsoper.

Projects:
The title role of Faust in Modena, Reggio Emilia and Piacenza, Rodolfo (La Bohème) in Bologna, and Fenton and Nadir at the Berlin Staatsoper. 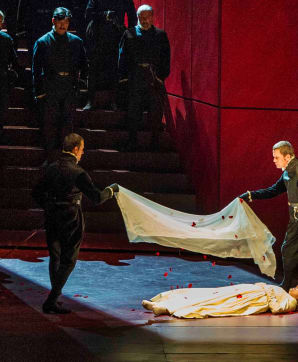