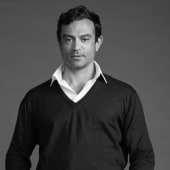 The artist Karim Zeriahen has often filmed dance and worked with renowned choreographers. His project for the “3e Scène” is his first cooperation with the Paris Opera. His film is based on the idea that the present continuously feeds on the past. Karim Zeriahen focused on two works that were premiered by the Ballets Russes in Paris at the beginning of the 20th century.
In “L’Après-midi d’un Faune”, the encounter between Rudolf Nureyev’s mythical and masterly interpretation of Nijinsky’s faun and the utterly fresh approach of François Alu, a young dancer who discovers the role for the first time, creates a new story. This sensual solo is complemented by a playful duo of muses from George Balanchine’s “Apollon Musagète” with the Paris Opera’s Étoiles Dorothée Gilbert and Myriam Ould-Braham. The films illustrate the continuity and constant renewal in the history of ballet : by learning choreographies that have been interpreted by generations of other artists, dancers create something new, personal and topical.