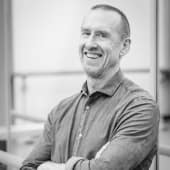 "For years, Rauf"RubberLegz"Yasit and myself have been independently focused on choreographic strategies involving threading the body into its own negative spaces, while Riley Watts and Rauf have been intensively performing these kind of threadings, Riley with The Forsythe Company, and Rauf in his own unique work. This film brings together these three work streams by intertwining two bodies to form what I like to call "optical puzzles". In these puzzles, it is obvious to the viewer that there are only two persons in the composition, but the complex threading of their two bodies creates optical conundrums that frequently defy the apparent logic of the situation. The title ALIGNIGUNG is also a threading of two languages. The English word align sounds like the German word allein, which means alone. That English word has been inserted into the German word Einigung, which means agreement. So the "threaded" result is a pun and a hybrid, which could mean aligning in agreement with oneself and another, on one's own."